Myanmar (aka Burma) has only recently opened to tourism after lifting an embargo on foreign visitors. Tucked away in the South Asian peninsula, the country is unknown to most western tourists, except for it’s communist politics followed by a fight for democracy led by female activist Aung San Suu Kyi. A deeper dive into Myanmar’s history opens up a rich pandora of culture, religion and architecture spanning thousands of years. The country is biodiverse with beaches, mountains, lakes, rivers and forests. While it is difficult to see Myanmar in just a few days, I managed to capture a few highlights through my lens.

Yangon, the capital, is where I spent most of my time as our ship was docked there was three days. Sailing into the Irrawaddy River Delta gave way to views of muddy brown waters with nomadic fisherman on traditional boats, followed by golden domes popping out from bare villages. The city, itself is pretty small, with business buildings, hotels, tea shops, gardens and lots of pagodas. Having been cut off from the rest of the world, you won’t find any name brands or chain restaurants here. People still dress traditionally in sarongs (called longyi) and put bright creamy paste (thanaka) on their faces, while crouching on low stools on the street side cafes eating fish curry and steamed rice. It is easy to walk around, taxis are cheap, though traffic can be bad at times.

Chaukhtatgyi Buddha Temple houses one of the most revered reclining Buddha statues in the country. Though the original statue was built in 1899, it has been modified and reconstructed few times until the 1970s.

Dominating the Yangon skyline, Shwedagon Pagoda is spectacular by day and night. Shwedagon Pagoda is the most sacred Buddhist pagoda in Myanmar, and perhaps the oldest Buddha stupa in the world, built between 6-10 centuries CE. Allow yourself at least a couple of hours to wander around the complex of temples to absorb their splendid beauty, and maybe you would feel like spending a few minutes in silence or meditation.

In the evening, head over for dinner to Karaweik Royal Barge. Karaweik Palace was constructed in the shape of a barge as a symbol of Burmese culture and arts. It serves international buffet with cultural performances. Other restaurants I tried were Yangon Tea House, a casual and hip Burmese/ Indian restaurant, and Feel Myanmar, a traditional place where you can pick and choose your food and quantity. This is a great venue to safely try a lot of Burmese dishes that you may have seen on the streets as well.

On the other side of Yangon’s cosmopolitan city, is the township of Dala. This is the place to go if you want to see daily life of the locals – where they live, shop, study and pray. Most people cross the river on ferry boat to work in the city. Walk through the wet markets, visit a monastery, stop by an orphanage, and ride on a trishaw.

From Yangon, take a short flight to the city of Bagan, in the eastern province. It is said there were over 10,000 religious structures built in Bagan between 9-13 centuries, though only 2,000 of them still remain today. Shwesardaw offers a great lookout to many of these temples spread across the archeological area.

Though there are dozens of other temples in the area worth visiting if you have the time, Shwezigon Pagoda built by the Mon Dynasty, is covered with more than 30,000 copper plates (originally gold). The pagoda houses four huge bronze statues of Buddha, and contain his original footprints.

Lampi Island is the only marine national park in Myanmar, home to over 1000 species of animals, plants and marine life, as well as occasional sea gypsies. Here you can take a private zodiac cruise to visit the mangroves.

Further south is Shark Island, a secluded natural island perfect for snorkeling, swimming, and relaxing on the white sandy beach. There are a number of beaches and exclusive beach resorts in Myanmar, that offer opportunities to see the rich coral formations and marine life.

Located at the Myanmar-Thailand border, is the charming town of Kawthoung. With strong Indian and Muslim influences, it is a town on a hill where you can walk around and explore within a day. Kawthaung is also the starting point for Myanmar-based cruises to the vast Myeik Archipelago.

My trip to Myanmar was possible through Silverseas Discoverer Andaman Sea Expedition cruise. I was on their inaugural sailing to Myanmar, a country that should be added to your travel bucket list! 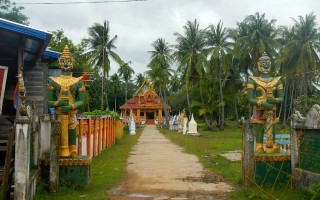 I enter Laos (pronounced Lao) at one of the less frequented border crossings from Thailand and arrive at the town of Pakse. With just one strip of hotels and restaurants, Pakse usually serves as a launching pad to other destinations in southern Laos. I immediately decide to take a bus to the 4000 islands. In an hours time, I find myself on a “minibus”, or rather, a large enclosed wooden crate on the back of a truck packed with 26 Laotians and me. Over the course of 3 hours we travel down a two-lane dirt road. The driver stops sporadically to let some passengers off, as others get on. Sometimes, the stop is merely to pass packages, food and animals through the crate. We are held up often because of traffic jams caused by cow crossings and pigs napping. Finally, we arrive at the “port” for the islands, which is a muddy pit with a rickety wooden boat attached by rope.

The islands get their nickname “4000” due to the innumerable sand islets that appear and disappear with the water levels, according to rainy and dry seasons. At one time, they served as an important link for supply lines between Saigon and Laos during the French Colonial Era. I settle on the north side of Don Det in one of the many guest houses offering hammocks that swing over the water. The Mekong isn’t swimmable, but that’s not why the islands attract visitors. It is the laid back atmosphere, the authentic view of Laos culture and the beautiful scenery that make the most southern destination in Laos desirable.

Don Det is a fascinating place, I discover, as I ride my bike around the island. The path leads me along the river through small village communities where naked children run around in the mud with chickens clucking about. Buddhist temples are scattered through the villages, spotted by their brightly tiled images on white plastered walls. And all of a sudden, I find that I am completely surrounded by bright green rice fields for miles on either side. The monsoons have arrived, flooding the fields and filling the rice paddies with water. Workers bend over planting seeds or plowing oxen through the mud.

I cross over a bridge linking Don Det with Don Khon. I end my bike ride at the Tat Somphamit and Khone Phapheng, the largest (by volume) waterfall in southeast Asia. The incredible sheer force of the water over large boulders and the expansive size of the river is breathtaking. If you continue on down Don Khon to the southern tip, there will be a view of Cambodia in the distance. Sometimes, if you’re lucky, you’ll be able to see the rare Irrawaddy Dolphin, unique to the Mekong, swimming through the water.

On my way back, I am stopped by a group of villagers. An older man explains to me, in French, that several trees have fallen over the road and no one will be able to pass until they gather enough men to lift them. They invite me to come sit with them and drink Laos Laos, an illegal rice whiskey used in small villages to welcome outsiders. So I sit on this fallen tree, on an island in the Mekong, with a group of Laos villagers, drinking whiskey, and marveling at my long day.

~ A San Francisco native at heart, Tess developed wanderlust at a very young age. Although she’s traveled extensively through America, Europe, Asia, Australia and New Zealand, she continues to look for new adventures to blog about and now resides back in San Francisco. Follow her musings at http://tess-murphy.com and on Twitter at @Tesstravels.