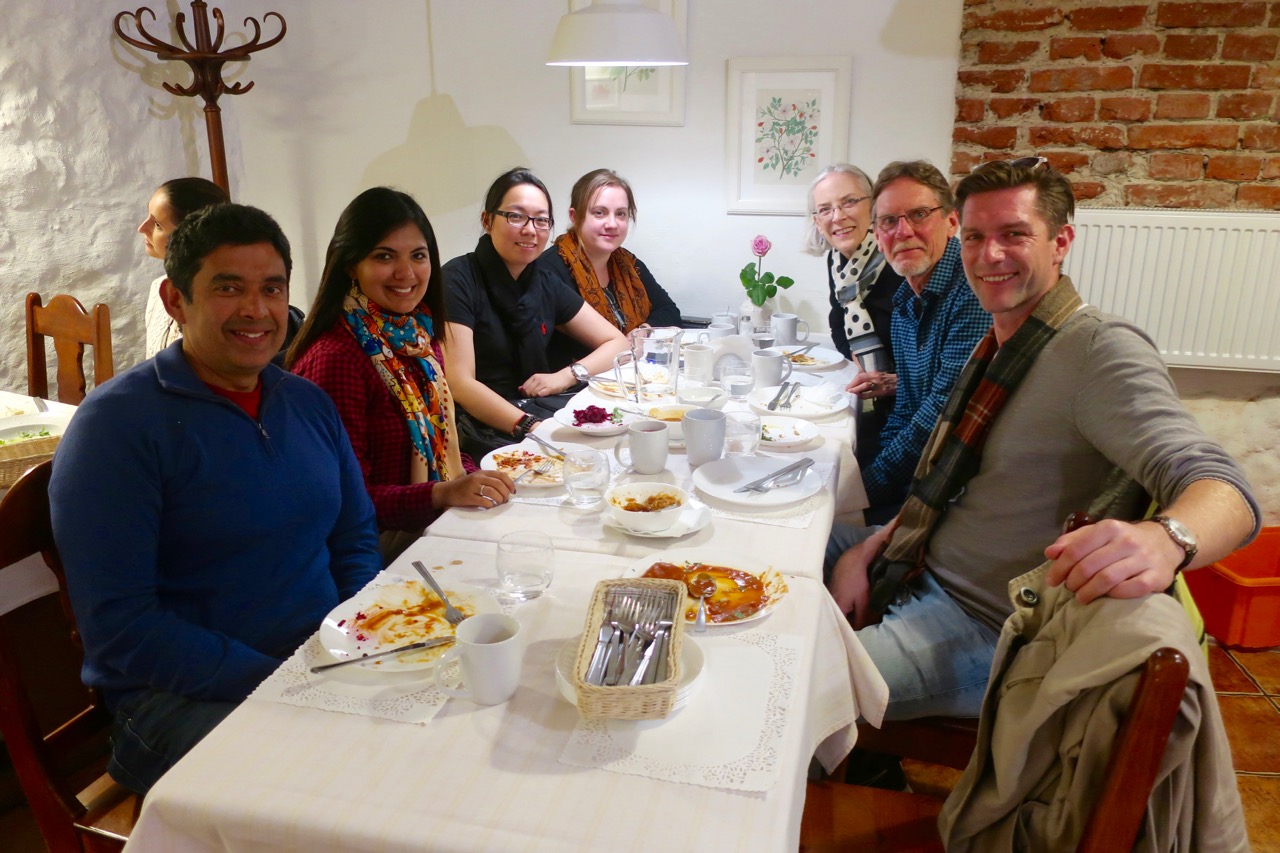 Want to know what to expect to eat and drink on a Polish food tour when traveling in Poland? Living in Atlanta, I have not had much exposure to Polish cuisine. My limited knowledge was of sausages, pierogis and cabbage stews. So when I recently visited Krakow, I decided to get the aid of experts at Delicious Poland to embark on an authentic polish food tour to learn more.

About 6 food enthusiasts met our guide, Maciej, near the Jewish old quarter known as Kazimierz, for a 3.5 hour long walking/eating adventure across this beautiful historic city.

Our first stop on this polish food tour was Przystanek Pierogarnia, a family-run take-out place specializing in the famous local delicacy, pierogi or stuffed dumplings. These are softer than Italian ravioli and served with fried onions and sour cream, not sauce. We sampled the most traditional pierogi ruskie (cheese and potatoes), pierogi z kapustą i grzybami (sauerkraut and mushrooms) which is eaten for Christmas, pierogi ze szpinakiem (spinach), and pierogi z sliwkami (plums). The fruit pierogis, though sweet, are not considered a dessert. They are made with seasonal fruits and are served as part of the main course.

Next we sat down at Zalewajka Restaurant for a bowl of soup, which is always the first course in Polish cuisine. Zalewajka or sourdough soup is traditionally served on Easter and on the 2nd day of a Polish wedding. It is made with eggs, sausages, and vegetables and often served in a bread bowl. We also had barszcz, a special kind of beet soup made from pickled beets, garlic and sourdough bread, paired with ground beef and pork stuffed pierogis. You can add boiled eggs or beans to make it heartier. This soup is great in a mug on a cold winter day.

Next, we walked to Plac Nowy, the heart of Kazimierz with it’s trendy bars and a square with hole-in-the-wall food hatches and open-air shops. Zapiekanka is one of the oldest fast food dishes in Poland that originated during the time of communism when there was not much to eat. It was essentially a toasted baguette topped with mushroom, cheese and ketchup; though there are many more variations available now. The footlong zapiekanka is the perfect snack while beer hopping!

You wouldn’t think of finding a cool bar inside a Jewish prayer house, but Hevre is just that. Remnants of original paintings can be seen on the old stone walls against a lively bar atmosphere. Maciej told me that according to Polish belief, you can’t trust someone until you have had a shot of vodka with them. So we cheer “nostrovia” as we drink Żubrówka, a yellowish Polish rye vodka made with Bison grass for an earthy herb flavor. Served cold, the liquid goes down smooth, leaving notes of coconut, vanilla and almond in my mouth. We also taste Soplica Pigwa, which is vodka made with quince, a uniquely Polish distilled spirit similar to moonshine.

Contemporary beer making is also catching up among young people in Poland, and a female beer maker is behind Ursa Maior. Named best home brewer in Poland, Agnieszka Łopata got her Ph.D. in environment protection and brews Belgium and serves Rejwach na Kazimierzu (a Belgian Summer Ale) and Drapieżnik (Session IPA), among many other varieties in the Carpathian Mountains of southern Poland. Go downstairs to the cozy basement decorated with eco friendly tables, paintings and light fixtures created by anonymous artists.

Of course, no polish food tour would be complete without sausages, so we are offered plates of high quality kielbasa szlachecka (country style farmers pork sausage with pepper and garlic), kiełbasa Krakowska (Krakow’s sausage), and oscypek (smoked sheep’s cheese) to snack along with our beers.

The Main Course: Kuchnia u Doroty

Our last stop and the main dinner is at Kuchnia u Doroty, where we again travel to a cozy resturant, for traditional Polish dishes. The main meal of the day for Polish people is lunch (called obiad) so this place is generally packed on weekend afternoons. Similar to latkes are placki ziemniaczane z gulaszem or potato pancakes served with Hungarian goulash and sour cream. This is a dish in itself and quite delicious! Bigos is the national dish of Poland, aka hunter’s stew made of leftovers. Add ham, bacon, mushrooms, plums, cabbage – any bits left from the week. The more ingredients, the better it tastes! Gołąbki (or little pigeons) are similar to Mediterranean dolma. These are cabbage rolls stuffed with rice, mincemeat and spices, topped with homemade tomato sauce. No meal is complete without a buraczki or shredded beet salad, and homemade plum juice (because plums are in season in October) or kompot to wash down.

Just when I have no more room in my belly, Maciej introduced me to racuchy, his favorite childhood dessert that his grandmother would make for him. The crispy warm apple fritters dusted with powdered sugar and served with a sour cream dipping sauce reminds me of funnel cake. I could have eaten a plate of these but I restraint myself and managed to leave some for the other guests!

There are no upcoming events at this time.