While Atlanta braced Snowpocalypse 2014, a 1-2 inch snow accumulation that virtually paralyzed the city’s roads, I kept abreast of the happenings via local TV stations and social media. It was ironic to see a plethora of excitement, panic, frustration and gratitude, all within a matter of minutes. Friends were posting photos of chaotic traffic and icy accidents while waiting in their cars to get back home (the record being 24 hours for a 30-mile drive). Desperate parents were calling around to see if someone can get to schools on time and pick up their kids since many school buses stopped operating. On the other hand, I also saw photos of kids playing in the snow, sledding around the neighborhood, while adults drank hot cocoa by the fireplace. The most heartwarming stories came from everyday citizens of Atlanta, who collectively reached out to help those in need.

A technology consultant, Michelle Sollicito turned out to be one of the hero’s of this week. She created an open group on Facebook called “SnowedOutAtlanta” where anyone could share local level traffic updates, shelter sites and emergency phone numbers. Many of the 50,000 members (who joined the group within 24 hours) posted locations of where they were and offered to take strangers in. Sollicito told The Atlanta Journal Constitution that the group had helped over 400 people, including an elderly woman with cancer, a pregnant mom with a young child, and a man with a heart problem who needed to get to the hospital. 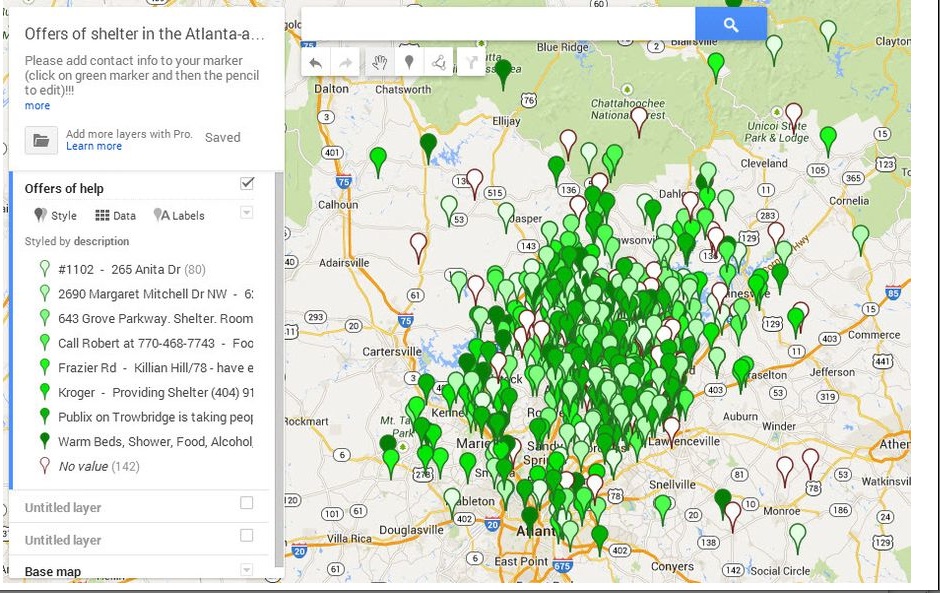 On the street level, volunteers jumped in to pull cars out of ditches, and push vehicles out of the way. I came to know several good samaritans who carried water and snacks in their backpacks, distributing to those stuck in their cars. Ray Thatch, who was working near Atlanta airport at the time, felt that the city’s 30 or so snow vehicles may not be able to reach 4 million people in time. He decided to drive around in his rugged Land Cruiser to look for stranded folks and rescued people till 3am.

Almost all of my Atlanta based Facebook friends listed their home coordinates and offered a place to crash if someone was near the area. My husband ended up spending the night on a friend’s couch on Marietta St, since he couldn’t get any further than 4 miles in 4 hours, while I hosted another girlfriend who was having a nervous breakdown after 8 hours of driving. This may have been the largest impromptu slumber party in the city’s history!

Anna Sierdzinski was walking around Lenox Rd where she found a lady standing in the cold and asked her if she needed a cup of coffee or to use the restroom. The stranger ended up spending a few hours at Anna’s home, escaping the bitter temperatures. In fact, a lot of people took to the streets handing out free hot cocoa and coffee, as Atlantans temporarily abandoned their cars and walked home. Keep in mind, Atlanta roads are not made for walking and oftentimes, sidewalks are hard to find.

Even the day after the storm, while all schools and offices were closed, people continued to share traffic updates, send help, and care for others. Small business owners and friends, David Baumgarten and Daniel Adam Johnson used the snow-day off to feed the homeless and passersby. They grabbed a grill, gas tanks and hot dogs and set up shop right from their pick up truck on Interstate 20. 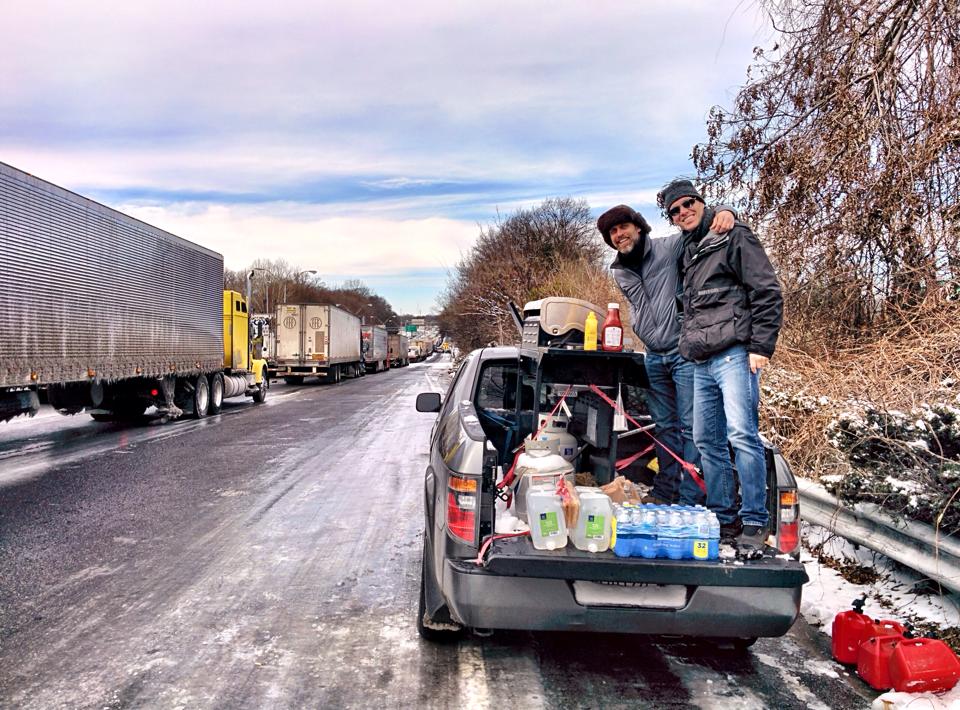 According to local reports, 1 person died, 130 were hurt, and 1300+ accidents occurred during the snowstorm. This kind of effort helped save lives, and whilst there were still some hideous crashes of which the likes of legal firms (e.g lamber goodnow) will likely be helping with the recovery from, it is heartwarming to know that the people of our city worked together in a time of great need.It could have been worse had it not been for all those who watched out for their neighbors and friends. The events of past two days only prove how we, as human beings can come together and overcome any disaster. 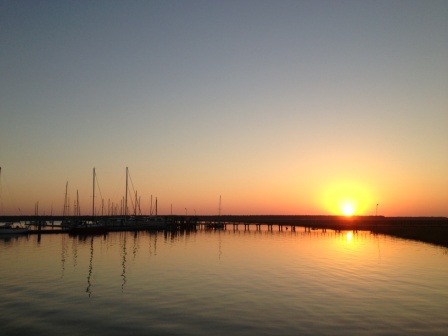 Where to find the best grits in the south?

Sucheta is an award winning food and travel writer, who has traveled to almost 100 countries across 7 continents. She is also the founder and editor of 'Go Eat Give' and author of 'Beato Goes To' series of children's books on travel. View all posts by Sucheta Rawal